RedBubble: Can You Make Passive Income?

Redbubble is an uber-popular website for artists where you can upload photos of your artwork and Redbubble will do all the work to print and sell the products, from pillows to canvas prints to t-shirts.

A good way to make passive income IF AND ONLY IF you market your artwork AGGRESSIVELY.

My experience with Redbubble

I signed up with Redbubble two years ago. (My aunt wanted to order cards of my artwork and it was the only way I could think to do that.)

I paint with watercolors and my niche is nature, animals, and flowers. I uploaded a watercolor of two cardinals and several watercolors of bluebirds.

I chose different products like pillows, cell phone cases, and canvas prints for my art. I mostly let Redbubble set the prices for my art.

At that point, I sat back to watch the cash roll in. “Making money, ” I thought to myself, “Has never been easier.”

There was just one tiny problem.

Redbubble does NOT promote your artwork. You have to do all the promotion yourself.

Once I realized that my art wouldn’t sell itself, I decided to create a marketing strategy. I grabbed the phone and called up several of my aunts.

“I’ve got my art on Redbubble!” I said excitedly. Two of my aunts purchased sets of my watercolor greeting cards. I got a couple of dollars from each sale, and was ecstatic.

Things leveled out after my initial success. Translation: my art stopped selling. As soon as my enthusiasm waned, my marketing dropped away and no one bought any of my products.

I forgot about my Redbubble account for an entire YEAR. Then one day out of the blue, I got an email from Redbubble. Someone had bought a canvas print of my cardinal pair watercolor painting. I made $17.37 off that sale, which was completely passive income.

A few months later, (with no marketing), I made another sale of two greeting cards. The money is sporadic but it’s always nice to see an email from Redbubble in my feed.

To date, I’ve sold 34 items on Redbubble; in the year 2020, I am ramping up my marketing and hoping to sell more.

The money is unreliable and sporadic, but hey, no work involved. Any $$$ I make gets deposited directly in my Paypal account.

Redbubble sets the default for artists at 20%, but you can adjust this price if you like.

For example, my cardinal pair watercolor painting is priced at $86.87 for a large canvas print. I left the default at 20%. If it sells, I make $17.37 while Redbubble does all the printing, shipping, etc. and collects $69.49.

If I want to make 50% of all my sales, instead of 20%, I CAN adjust the settings to collect that percentage.  However, Redbubble will always take the same amount. So if I insist on raising my prices, the extra money I make comes directly out of my customer’s pocket. I leave the default at 20%.

Redbubble is easy. Uploading your artwork is simple, and the website is intuitive. Once you’ve got everything set up, the only thing left is to market like crazy.

Don’t expect to become a millionaire, but if you market your art, (and it’s good) you can make decent passive income!

What do you think? How much have you made off Redbubble?

I like taking pictures. I earn $$$ online by writing, illustrating, and working for other companies. Click around and stick around for the best ways to freelance online!

Check out my zazzle shop… 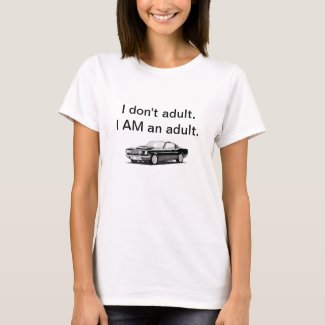 I am an adult T-shirt
by AdultingTshirts